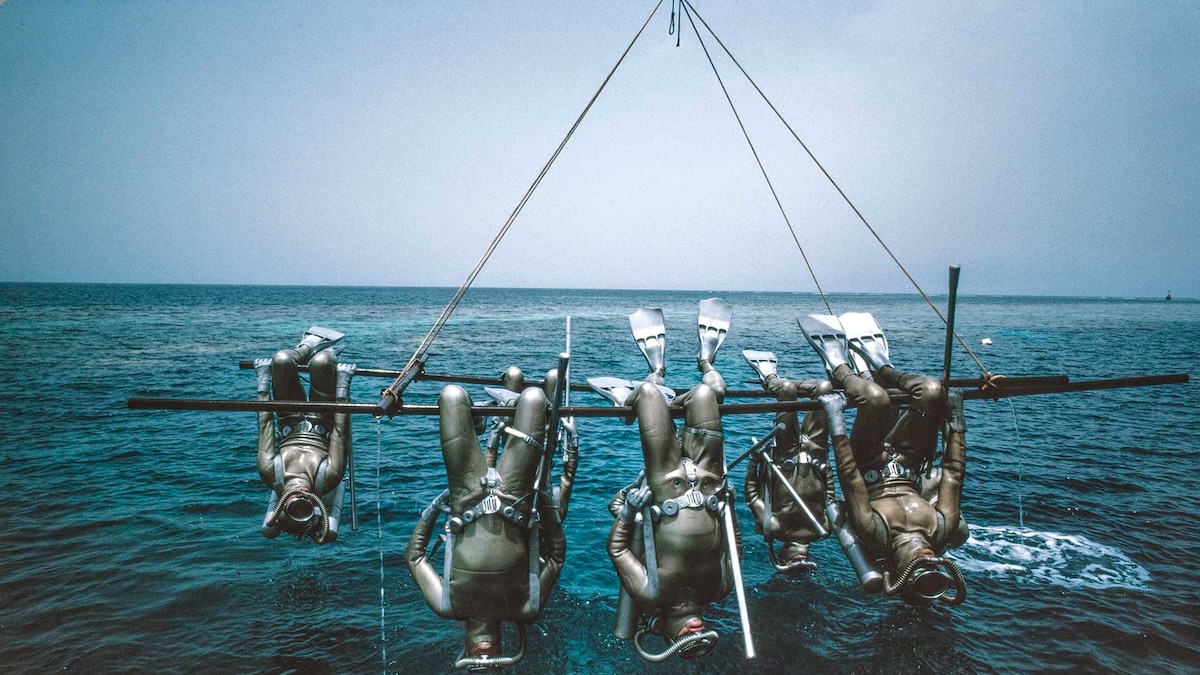 The man who taught humans to breathe like a fish

Become Cousteau, which is now playing in theaters, begins airing on Disney + on November 24.

We were floating in the shade of a jetty on Isla Vieques in Puerto Rico. Wooden slats a few meters above our heads protected us from the tropical sun. The weather-beaten pillars have disappeared under the water’s surface. It was cool there but barren – a man-made place only suitable for a quick rest on our first foray into snorkeling.

Will pointed down. His eyes were wide behind his mask. He dipped his head under the water. I followed.

We have entered another world. Above the water’s surface, the pier was a drab structure of warped wood and peeling paint. Beneath the surface it teemed with life: orange and yellow corals wrapped around the columns, lush sea plants rippling in the current, schools of silvery fish streaking between the poles. This narrow place under a dock built decades ago for American warships was as fruitful as any jungle, but unlike a jungle, we could float in the middle and examine it from all angles.

We never imagined being surrounded by so many wild animals and yet that was not enough for Will. “It was so cool,” he said as we walked back to the hotel in our guides’ doorbell van. “I want to try scuba diving. He didn’t want to be tied to the surface by our rented snorkels. He dreamed of diving deeper, exploring the ocean more, seeing its wonders for himself.

Although Cousteau learned to swim at the age of four, his first ambitions were for the sky, not the sea. In 1930, he entered the French Naval Academy to become a pilot, a dream sidetracked by a car accident almost mortal who fractured both arms. As part of his convalescence, his fellow naval officer Philippe Tailliez suggested that he try ocean swimming. Tailliez lent him a pair of glasses and took him underwater hunting in the Mediterranean near Toulon, France.

Swimming with the goggles was a revelation. “As soon as I put my head under the water I got it, a shock,” he said later. He had discovered “an immense and totally virgin domain to explore”.

“I understood that from that day on, all my free time would be spent exploring underwater.

Eventually, it could go up to 60 feet deep and stay there for 70 to 80 seconds. But it wasn’t long enough or deep enough for Cousteau. “I have always rebelled against the limitations imposed by a single breath of air,” he wrote in a 1952 article for National geography, his first for the magazine.

Cousteau had to find his own solution. “I became an inventor out of necessity,” he said.

To go further, he needed a device that would provide breathable air that also matches the pressure of the water: as a diver goes further, the pressure increases, reducing the volume of air. in the body and potentially causing the lungs to collapse. Cousteau’s father-in-law put him in touch with engineer Émile Gagnan, who specializes in high pressure pneumatic design.

It was in the middle of World War II and Germany controlled most of France. Gagnan worked for the country’s largest commercial gas company in Paris, where he designed a valve that regulated the flow of fuel, allowing cars to run on cooking oil, an essential wartime adaptation when Nazis had requisitioned all gasoline for motor vehicles.

When Cousteau traveled to Paris in 1942 to explain the air pressure problem to Gagnan, the engineer thought his gas regulator might be the solution. Together, they tinkered with it until they had something to test, a regulator attached by tubes to two compressed air cartridges. Cousteau took the prototype for a swim in the Marne east of Paris.

“I took normal breaths at a slow pace,” he said, “I put my head down and swam slowly up to 30 feet.”

The device operated, while it was horizontal. When he was standing there was an air leak. Cousteau and Gagnan rearranged the intake and exhaust tubes so that they were at the same level. Eventually, they got a version that Cousteau felt comfortable trying out in the sea.

For many months in 1943, Cousteau, Tailliez and their friend Frédéric Dumas carefully tested the device they called the Aqualung. They have done over 500 dives in the Mediterranean, going a little further each time. By early fall they had reached 130 feet. By October, Dumas had descended 90 feet more.

“The best way to observe a fish is to become a fish”, wrote Cousteau in this first National geography article. “And the best way to become a fish – or a reasonable facsimile of it – is to don an underwater breathing apparatus called an Aqualung. The Aqualung frees a man so that he can slide, without hurrying and without being injured, in the depths of the sea. ”

Almost 80 years after its invention, the same basic design is still in use. “It’s as simple and elegant as a doorknob,” says a long time ago National geography underwater photographer David Doubilet. “It doesn’t fail. In 65 years of diving, I have never failed.

But the ability to probe the depths exposed divers to other dangers. Although the Aqualung made breathing easier by balancing ambient and internal pressure, it could not prevent what early divers called “depth removal”: nitrogen narcosis, when nitrogen bubbles develop in the bloodstream as the diver descends. For Cousteau, it was “an impression of euphoria, a gradual loss of control over reflexes, a loss of the instinct of self-preservation.” For Albert Falco, who sailed with Cousteau for almost 40 years, “the air takes on a strange taste and you get drunk on your own”.

Nitrogen narcosis could be fatal. After the war in 1947, Cousteau, who was still in the French Navy as part of his Underwater Research Group, organized scuba diving tests in Toulon. He wanted to demonstrate that Aqualung would allow divers to go to more than 100 meters deep. But the person behind the first attempt, the second Maurice Fargues, has died. He had passed out at 120 meters (390 feet) and was frantically pulled to the surface but could not be revived.

Cousteau is devastated: “I’m starting to wonder if what I’m doing makes sense.

For the French Navy, he did it. They deployed the Underwater Research Group to clean up the deadly after-effects of WWII in the Mediterranean. Navy divers have removed cleverly hidden mines near busy ports. They recovered the dead pilots from the downed planes. They witnessed the underwater destruction of a war that had encompassed the entire sea coast.

“I put the stuff on and went to the bottom of the pool,” recalls Doubilet, who would then photograph the Sargasso Sea, the Great Barrier Reef and a large part of the ocean in between for over 70 years old. National geography featured stories. “I was glued to the bottom, but I was breathing, and it was just heavenly.”

“The Aqualung regulator meant a passport for 70% of our planet,” explains Doubilet. “He is a person whose importance to the planet can never, never be forgotten or underestimated.”

Photographer Laurent Ballesta, who grew up swimming, snorkeling and scuba diving on the French Mediterranean coast, was also influenced by Cousteau. When Ballesta was 16, he was with friends on a boat when they were suddenly surrounded by sharks. Based on his avid viewing of Cousteau’s documentaries, he recognized them as harmless basking sharks and jumped into the water to swim with them.

When Ballesta returned home, he told his parents what had happened, but they didn’t believe him. “It was then that I decided I had to learn photography.”

Since then, Ballesta has discovered a new species of fish called the Andromeda goby and was the first to photograph the prehistoric coelacanth underwater. More recently he has recounted for National geography an expedition in which he and his crew lived for 28 days in a pressurized capsule that allowed them to dive for hours into the depths of the Mediterranean.

(In this episode of our podcast Understood, we chat with photographers David Doubilet and Laurent Ballesta about how they were inspired to follow in Cousteau’s footsteps by making discoveries during their own amazing and sometimes terrifying adventures. Listen now on Apple Podcasts.)

Jacques Cousteau remained active in underwater exploration until his death at the age of 87 in 1997. “My job was to show what was in the sea – its beauties – so that people get to know and know about it and to love the sea, ”Cousteau wrote.

It is a world which, despite its pioneering contributions and international influence, is still largely unrecognized. According to the National Oceanic and Atmospheric Administration, more than 80% of our planet’s oceans remain unexplored.

In the 78 years that Cousteau and Gagnan invented the Aqualung, more than 28 million people have followed it in the ocean and learned to dive.

This spring, my son and I will join them. This is what Will wanted for his 17th birthday: a passport to another world.