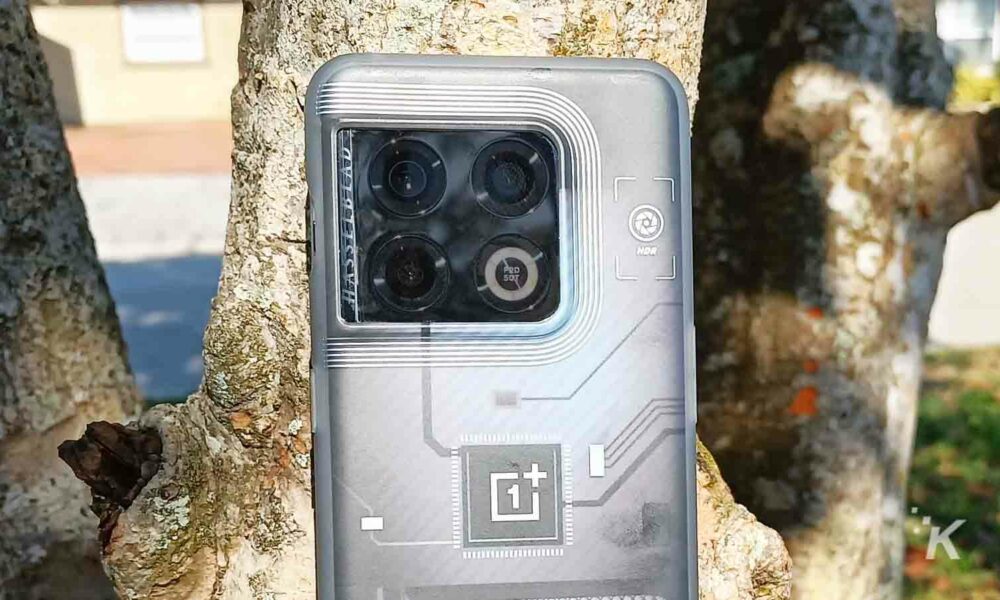 There were plenty of black, gray or white rectangles that came in fancy boxes, but for some reason the OnePlus 10 Pro just hits differently. Right out of the box, this thing impresses even though it’s just another matte black smartphone.

The OnePlus 10 Pro is a competitive phone at the level of the Samsung Galaxy S22 Ultra or the iPhone 13 Pro Max. Between the camera, battery, refresh rate, screen, and storage, the differences are negligible. Frankly, it depends on which manufacturer you prefer.

Throughout its history, the OnePlus line of phones has stood on the sidelines as Samsung, Google and Apple battle for dominance. With the OnePlus 10 Pro, OnePlus should lead this competition.

Available on the T-Mobile and Verizon networks, the $900 smartphone is getting plenty of traction, so let’s dive straight into the review.

It’s all about the camera

It might be the massive camera block on the back with three cameras thanks to a partnership with Hasselblad, but the OnePlus 10 Pro looks like a camera with a phone attached.

The main camera is a 48MP beast. This is complemented by an ultra-wide lens at 50MP and a telephoto lens at 8MP and 3.3x optical zoom. The front camera is 32MP, if you prefer high quality selfies.

If you’ve used a Google Pixel or comparable phone, the only thing the OnePlus 10 Pro might be second to is a brand new iPhone 13 Pro Max. If you live outside of the Apple ecosystem and take pride in your mobile photography, you might want to check out this camera.

There’s still something wrong with smartphone camera technology. The better it is supposed to be, the more it looks like created art, rather than pure photography of real things. It’s hard to really put into words.

As crisp and vibrant as photos taken with an advanced smartphone camera can be, there’s something ethereal about them that doesn’t quite match the reality behind the photo. Either way, the OnePlus 10 takes some damn good photos, even if there’s a sense of detachment.

Tom’s Guide has a good overview of specific camera specs as well as side-by-side comparisons. In this review, however, you can see some unfiltered natural light footage from my yard that really highlights some of the capabilities of this camera setup.

The fact is that every year a list of black rectangles is published. We flip these smartphones in our hands, compare the cameras, and discuss Apple vs. Android operating systems.

Examining these phones, especially within the Android operating system ecosystem, can often come down to the smallest technical details.

It seems that with each new iteration of a phone there are a slew of checkboxes in the settings. The OnePlus 10 seems to suffer from too many options. This isn’t necessarily a negative, as the depth of options gives you more control over your smartphone experience.

The downside, however, is that you feel like you’re repeating actions to toggle a single option on or off.

For example, to manage notifications, it seems that they not only need to be enabled in the app’s settings menu, but also in the general settings.

Some of these specific menus are buried in themselves, which adds a one-time burden to wade through all the available menus. This is a minor inconvenience considering the overall smartphone experience.

This isn’t the only minor issue that other reviewers have noted. There’s something about the scrolling refresh rate that seems to ruffle some feathers. This is not something that would be noticed by most users.

It’s basically one of those situations where someone tells you they can visually tell the difference between 4K and 8K on a 42-inch TV. In reality, they can probably only want to look impressive.

10 is greater than nine

I skipped the OnePlus 9, but apparently the 10 brings slight improvements, especially in the Nightscape camera mode. The OnePlus 7 Pro McLaren and OnePlus 8 spent some time on my desk, but neither ended up displacing my LG Velvet due to durability issues. I drop a lot of things.

The OnePlus 10 Pro comes with a pre-installed Corning Gorilla Glass screen protector. Unlike the LG Velvet (which was just a $600 phone when it was released), it’s not IP68 or MIL-STD-810G rated, so you’ll need a case.

It’s about 3mm longer than the OnePlus 9 and still doesn’t have a headphone jack (another reason I stuck with the LG).

It’s always a weird thing that more and more phone makers don’t make their phones tough enough that a case isn’t necessary. There was something very comforting about having a phone that was as durable as any case.

To be fair, most of the OnePlus 10 Pro are what you’d expect from an Android-based phone. But a little faster. It runs OxygenOS based on Android 12, with a Snapdragon 8 Gen 1 processor. The OnePlus Pro 10 has 8GB of LPDDR5 RAM so you can scroll with superior speed.

It comes locked to 128GB of UFS 3.1 2-LANE storage. You really don’t need much more than that since you’re backing up all your photos to the cloud anyway.

As good as the photos are on this phone, the video is even better. Except for the fact that it’s still a small screen for my old ass, the video was as perfect as it could get on a phone. The 120Hz Fluid AMOLED with LTPO display delivers as much depth and saturation as any TV.

There’s active color grading that adjusts based on your surroundings. This means that whether in a darkened room or on a park bench at noon, you get visible and impressive video.

If you watch videos or game all day on your phone, you’re going to worry about battery life, but that’s basically any phone. The OnePlus 10 Pro has one of the best batteries on the market. It holds about 12 hours of charge if you go hard.

If you’re just using your phone more casually, checking Facebook in the bathroom, and texting your friends, you’ll probably get away with recharging every other day. The 65W charger will pump the battery from empty to almost full (93%) in about 30 minutes.

Three dark mode options completely sold me on this phone. You know, I believe in dark mode everything. Soft, medium, and enhanced dark modes are the icing on the cake with the OnePlus 10 Pro. That, the AMOLED screen and the battery life should suffice, but it never does.

Honestly, the camera on this thing for the price is the biggest selling point. I liked playing with the tilt-shift function as well as the 150° function.

I didn’t get to try the long exposure as much as I would have liked, but I captured a lightning bolt in a cloud (pictured above) and the kids found it fascinating.

It’s hard to find a phone these days that checks all the boxes for a pro-level camera and screen for less than $1,000. The OnePlus 10 Pro checks these boxes without cutting any obvious corners.

This phone should put the Google Pixel on the back burner. It won’t, but it should. If you picture yourself as a smartphone photographer but live outside the Apple ecosystem, the OnePlus 10 Pro is the phone for you.

It is available on the T-Mobile and Verizon networks in black or forest emerald (green). You can get it directly from OnePlus, Amazon or BestBuy.

Just a warning, if you buy something through our links, we may get a small share of the sale. It’s one of the ways to keep the lights on here. Click here to find out more. A sample unit was provided for the purpose of this review.

Cheaper than the iPhone 13 Pro Max

Not available on AT&T

Optical zoom could be better

I wish it came in more colors

Town of Lawton Invites Community to Arts for All Festival

This 4K quadcopter drone is a budget option