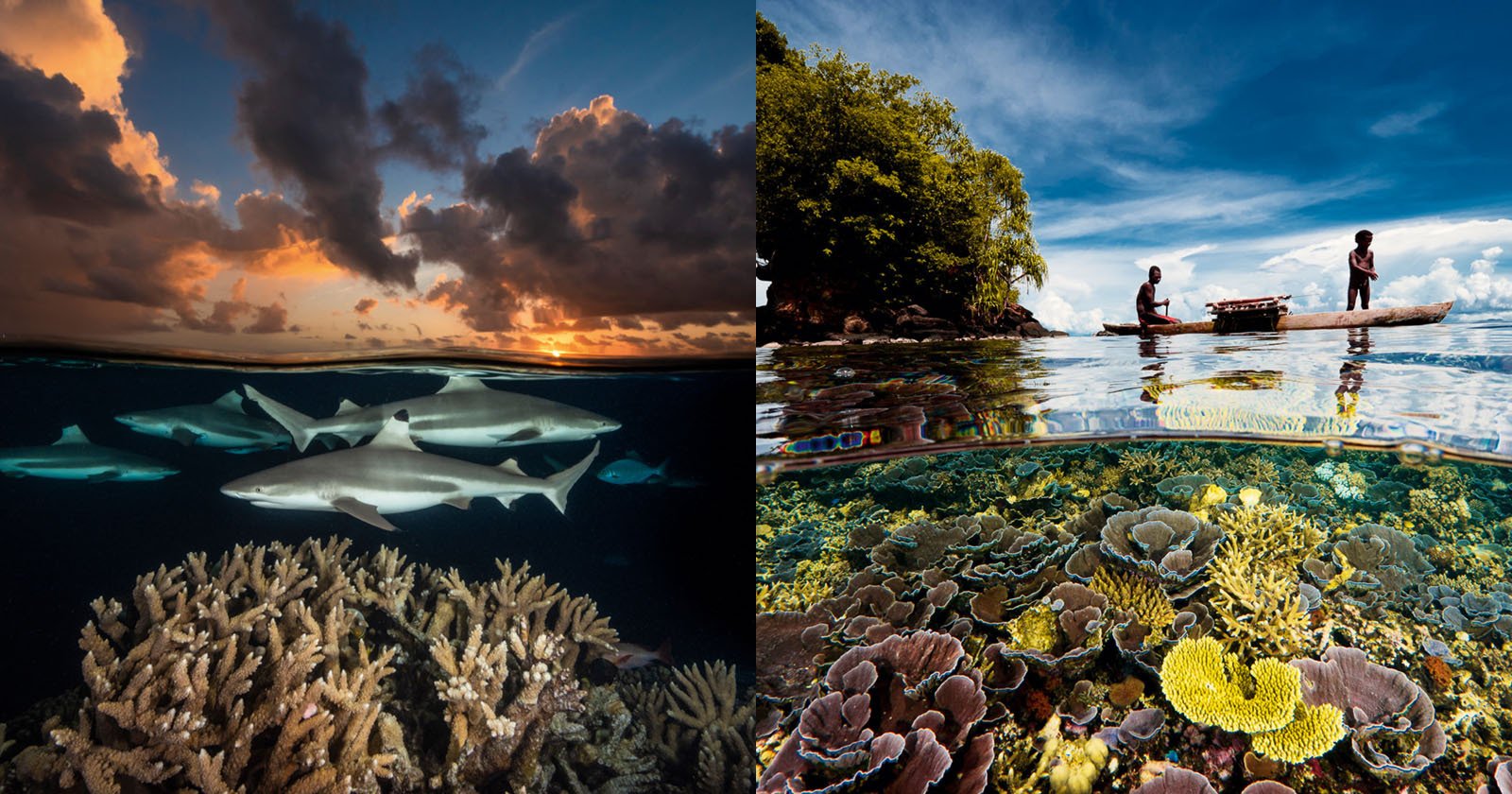 Photographer captures beautiful split photos above and below the sea

David Doubilet, known as a pioneering underwater photographer, has published a photo book that spans decades of his work and shows the symbiosis of the mysterious underwater world and the more familiar surface captured together in one image.

Doubilet is widely recognized as one of the greatest underwater photographers in the world and has regularly contributed to National Geographic for decades. Today, Doubilet unveiled his photo book â€œTwo Worlds: Above and Below the Seaâ€ which encompasses decades of documentation on the ocean and the still largely unexplored underwater world.

Doubilet discovered his passion for outdoor exploration during a summer camp as a child, when he was given a mask and sent under a dock to pick up sticks and “Meet the dreaded giant dock spider as punishment” because he didn’t want to hike. Since then he has been fascinated by underwater life and at the age of twelve his father used an anesthesiologist bag to create an underwater camera housing for Doubilet’s Brownie Hawkeye camera, giving him a taste of what was to come later in his career.

He published his first story as a teenager and went to collaborate with National Geographic in 1971. Five decades and 75 stories later, Doubilet still considers each dive to be a discovery.

â€œI’m always looking for the elusive half and half image and I continue to push the boundaries of photography to see where we can make technological advancements,â€ he says.

The idea for his Two Worlds projects was born very early on; Doubilet has always been fascinated by the surface of the sea “like a door to a hidden world”, he says. PetaPixel.

â€œFast forward to the missions in the far corners of the world where I started to slow down and watch as I descended. I saw corals rise to the surface and encounter tropical rainforests falling to the edge. I began to dwell on the border of surface and sea, recognizing it as our largest most important border on the planet. “

This is where the experiments of capturing half and half images in a single frame began. For Doubilet it is a thrill, knowing that a person on the surface has no idea of â€‹â€‹the fascinating and rich life that can be seen just underwater.

The project includes images taken throughout the Doubilet Underwater Quarry and stretches from Papua New Guinea to Grand Cayman Island, from the icy waters of the Antarctic Ocean to the Tropical Great Barrier Reef. . It has captured rare sea creatures, corals, plants and the unique underwater landscape, all of which help highlight important issues of climate change and marine life conservation.

Although it is an exciting experience, creating images like these can take a lot of work. Doubilet uses a variety of Nikon cameras in SEACAM underwater housings which are fitted with a range of wide-angle Nikkor lenses, behind a 9.5 inch optical glass super dome. The dome corrects the underwater magnification by 33% and extends the boundary layer of the surface on the curvature of the dome.

When Doubilet pulls, he should kneel or stand very carefully; sometimes it even floats with the housing and dome half in and half out of the water. It illuminates the lower half of the frame with two or more Sea and Sea YS 250 flashes.

The most difficult aspect of this type of work is finding two fascinating subjects in one frame to illustrate the essence of the place in which Doubilet is filming.

â€œAlthough I am driven to look for two moments in the world on each dive, the images themselves remain scarce,â€ he explains. â€œIn five decades and 75 stories as National Geographic photographer, I only produced a few dozen of these images that I really love.

â€œThe biggest border that affects every person on this planet is not inked, it is the surface of the ocean. It is a portal to this other 71% of our planet. No matter where we live, on the coast or inland, we depend on the oceans to produce oxygen and the resources we depend on. “

As difficult as underwater photography is, Doubilet does not intend to stop and hopes that his project connects people to the sea. The recently published book is an invitation for the public to enter this world: “to see, to know , explore, connect and protect the oceans â€.

Doubilet’s book “Two Worlds: Above and Below the Sea” is available for $ 60 and can be found on Phaidon’s website, along with other photographic work by Doubilet available on the Undersea Images website.

Image credits: All images are by David Doubilet and used with permission.

Is it too late to start drone photography?