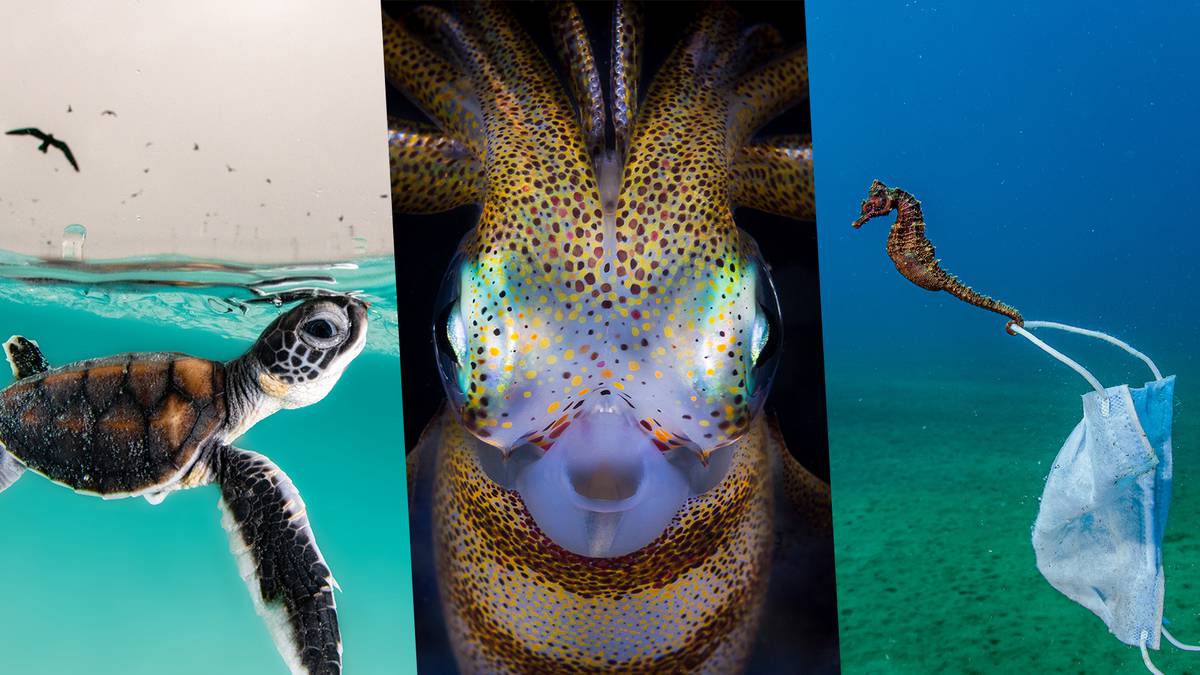 A window to mysterious underwater worlds has been opened through the lenses of the world’s best marine photographers.

The winning image for Ocean Photographer of the Year 2021 captured one of the oceans’ most endangered animals at the perfect time.

The perfectly composed turtle, surrounded by a frame of glass fish, was photographed by Aimee Jan’s camera in the Ningaloo Reef in Western Australia.

The winning photographer described how she took the photo while diving with a colleague.

“When I dove in to look, the fish separated perfectly around the turtle. I told her, ‘I think I just took the best picture I ever took,'” she said. declared. Nine News.

Jan’s image was chosen from a submission of thousands of people from all corners of our blue planet. Finalists included a vibrant photo of Scottish Gannets fishing off the Shetland Islands taken by Henley Spiers and, in third place, a freshly hatched Hawksbill turtle taking its first swim by Sydney photographer Matty Smith.

Produced by Oceanographic magazine, and with sponsors Tourism Western Australia and SeaLegacy marine conservation, the awards aim to “highlight the beauty of the ocean and the threats it faces”.

Awards judge and SeaLegacy founder Cristina Mittermeier thanked the photographers and said she hoped the images would have as much of an impact on viewers as they did on her fellow panelists.

â€œWe spent a lot of time discussing the power these images have in inspiring people around the world to advocate for the protection of the oceans. We also spent a lot of time admiring the incredible artistry. Thank you all. those who participated and congratulations to this finalists of the year. “

In its second year, the awards shed light in every corner of the ocean.

This included a spectacular luminescent squid in Victoria and the underwater caves of Quintana Roo in Mexico, captured by winner Martin Broen.

Equally impressive surf spots captured the imagination of the public and the judges. The image of Ben Thouard de Matahi Drolle in the big waves of Tahiti won the 2021 Adventure Photography category, while Phil De Glanville also took a break as a winner of the Community Choice category.

The most impactful on these images could be in the Ocean Conservation category.

The wildlife captured in the man-made ocean litter was darkly captivating and tragic.

A seahorse attached to a surgical mask by Nicholas Samaras and a photo by Steven Kovacs of a lizardfish hanging out on a cigarette butt have helped capture current threats to the health of our oceans.

Once in a lifetime meet a rare New Zealand penguin

Invercargill photographer Kimball Chen received Special Mention for his “once in a lifetime” image of an endangered yellow-eyed penguin under the Aurora Australis.

“I was joking with my wife, ‘Wow, it would be so good if we could make all of these factors work together.'”

Taken at the popular tourist spot of Curio Bay on the Catlins Coast, any visitor will tell you that nocturnal penguins are hard to spot. Kimball says spotting birds is all about timing.

“Penguins usually appear quite close to sunset, about 2 hours before. It can be very late in a hot day, closer to dusk. Or after sunset.”

There was no manipulation, a photo, and a lot of luck, the photographer said.

“The technology is amazing these days for high ISO.”

Showing one of the rarest penguins in the world, the stellar photo was shortlisted for the conservation award.

According to the Yellow-Eyed Penguin Trust of Dunedin, the Hiohio is in danger of extinction nationwide with fewer than 300 breeding pairs in the country.