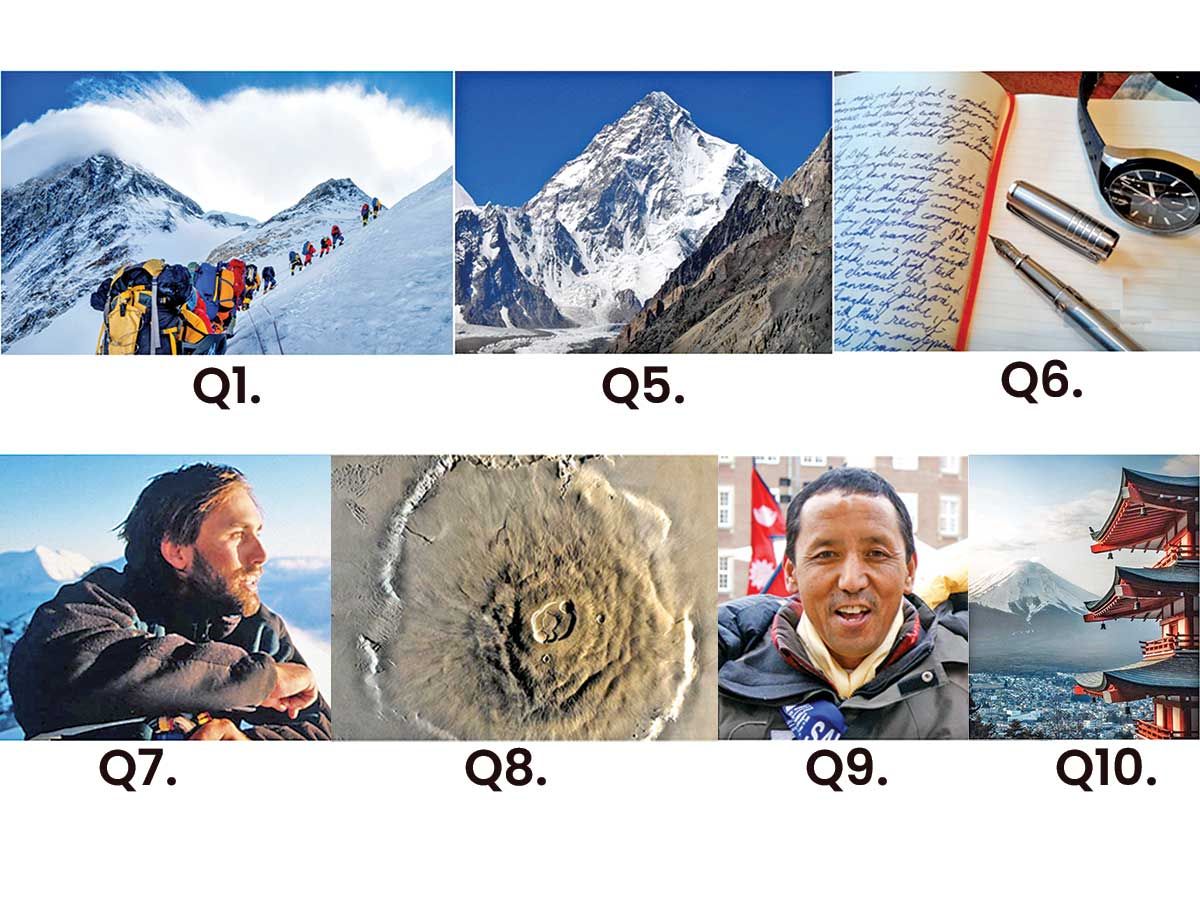 Q3. The Tibetan language what is called “QOMOLANGMA”?

Q4. The most famous mountain – the Mid-Atlantic Ridge while the highest mountain – Mount Vema. What is so unique about them?

Q5. It became popularly known as the â€œWild Mountainâ€ after George Bell, a mountaineer on the 1953 US Expedition, told reporters, â€œIt’s a wild mountain trying to kill you.â€ What mountain is it from? it question here?

Q6. What a famous global luxury brand is named on the highest mountain in the Alps and Western Europe. Also means “white

Q7. Erik Weihenmayer is an American athlete, adventurer, author, activist and motivational speaker and has also reached the summit of Mount Everest. What is glory?

Q8. Olympus Mons is about two and a half times the height of Mount Everest above sea level. It is the tallest and tallest mountain. Where would you find it?

Q9. This is Apa Sherpa nicknamed “Super Sherpa”, what is he famous for?

Q10. Super click! In this beautiful photo there is something on which a brand has been named. Name the brand

A1 It was named after Colonel Sir George Everest, a British surveyor and geographer who served as Surveyor General of India from 1830 to 1843. in honor of Everest

A2 Taumatawhakatangihangakoauauotamateapokaiwhenuakitanatahu. When translated into English, the word means “the place where Tmatea, the man with the big knees, who slipped, climbed and swallowed mountains, known as the landeater, played his nasal flute to his beloved “.

A3 name for Everest which means “Holy Mother”

A5 K2, the second highest mountain on Earth, it’s the deadliest; about one person dies on the mountain for every four people who reach the top

A7 On May 25, 2001, Erik Weihenmayer became the first blind[visually challenged] to reach the top of Mount Everest In 2005, he co-founded No Barriers, a non-profit organization whose slogan is “What is in you is stronger than what is in your path.”

A8 On the planet Mars, the highest known mountain in the solar system

A9 Apa Sherpa, a Nepalese Sherpa mountaineer holds the record for successfully reaching the summit of Mount Everest for twenty-one times, breaking his own record for the most successful climbs

A10 FUJIFILM A corporation, named after Mount Fuji in Japan, is a Japanese multinational conglomerate headquartered in Tokyo, Japan, operating in the fields of photography, optics, office electronics and medical, biotechnology and chemicals.

The first foldable smartphone from Oppo. What you should know about it