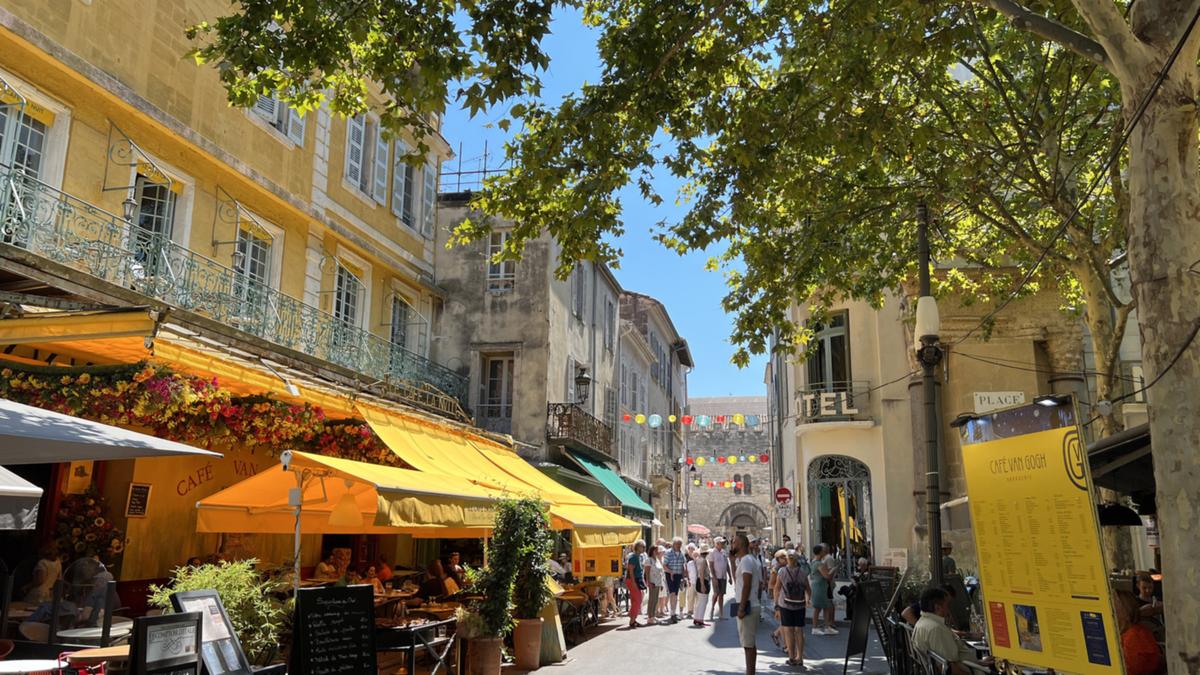 All around the French city of Arles, the hot summer is withering the fields of sunflowers. Scorched, drooping heads, they should be dry enough at the end of September to be harvested so that their seeds are crushed to make sunflower oil.

But in the ancient city itself, another sunflower crop is flourishing. There are bright yellow flowers on tablecloths and oven mitts, t-shirts and postcards.

Given its long human history, it still fascinates me that this pretty town on the banks of the Rhone in Provence is defined by a Dutch painter who came here in 1888, stayed only 15 months, and was considered a mentally ill and rather shunned by locals.

Vincent van Gogh put Arles on the modern map (although it is perhaps less well known that Julius Caesar had done the same on the Roman map, having founded the city in BC46).

Van Gogh painted four versions of sunflowers; that of welcoming Paul Gauguin, who came briefly to paint with him. They reveled in the beautiful light of Arles and van Gogh created 300 paintings and drawings here.

It inspired van Gogh’s Starry Night Over the Rhone – that starry night which in turn inspired Don McLean to write the song Vincent.

It inspired Cafe Terrace at Night – and, indeed, in Forum Square, the cafe is still there, and still a cafe. When Vincent painted it, the walls of the café were white (and remnants of it can still be seen on sections of the wall), but the streetlights projected the yellow hue seen in the painting. And today the cafe is painted to match.

Around Arles, there are boards with his canvases in the places where they were painted, notably in the courtyard of the Old Hospital of Arles (“L’Espace van Gogh”), where he went several times, including a visit after cutting off part of his ear.

Because it was also in Arles that Vincent’s mental health deteriorated. He submitted for a year to the Saint-Paul asylum in Saint-Rémy-de-Provence and continued to paint, producing irises, which Alan Bond would eventually purchase for $53.9 million.

He left all the work of his 444 days in Arles, of course. And he also left these words written: “They will surely recognize me and write about me when I am dead and gone.”

A LIGHTNESS OF LIGHT

Arles also inspires me. It’s a place where I easily and instantly fall into reverie; where (rather oddly) I seem to stop moving and, for the time I’m here, the world drifts past me. I am motionless and paused; concentrated and consumed. He has a deep place in me.

Maybe it’s charm – or just my desire to see him as charming.

Just as the post-impressionist painter was attracted by the luminous light of this region. It adjoins the 900 km² of the Camargue wetland, where the Rhône deposits mud, and which creates humidity and a landscape with reflective qualities.

Arles sits at the top of the Rhône delta, just 40km by road north of Port Saint Louis du Rhône, where the river meets the warm, salty Mediterranean Sea.

My afternoon begins simple and languorous. I walk around, without too much of a plan. . . and Arles is perfect for that. I’m not with a band. The only guide I have is serendipity and the knowledge that wriggling the side streets to the river will eventually lead me home.

There is a short, smooth black coffee.

There is a Perrier French water at room temperature, slightly sparkling, “with gas”.

There is a wand.

There is a red fruit ice cream.

My strolls through the alleys take me past closed windows, dogs dozing on the steps and posters for photographic exhibitions. There is a young man taking pictures with a Rollei film camera. Another with a plate camera in a wooden box, taking portraits of visitors, then developing them on the spot; wash chemical-free prints in a bucket of water.

Photography is part of daily life in Arles, where there always seem to be small exhibitions, and the Rencontres d’Arles photography festival has been held every summer since 1970.

I wander, enjoying feeling still, peaceful and languid – and enjoying the liberation that phone photography has given me. After a career as an equipment carrier, I feel liberated. (Although they are, I’m really relieved to have left my two new Canon R7 cameras and their lenses in my room.)

I notice the familiar words again above the Hôtel de Ville—the town hall in the Place de la Republique. “Liberty, equality, fraternity. Yes, I feel all that in my photography — in this free and emancipated gaze on the world in general, and on this hot summer afternoon, in Arles in particular.

I am lost in reverie, sunflower yellow, pure light and lightness of being.