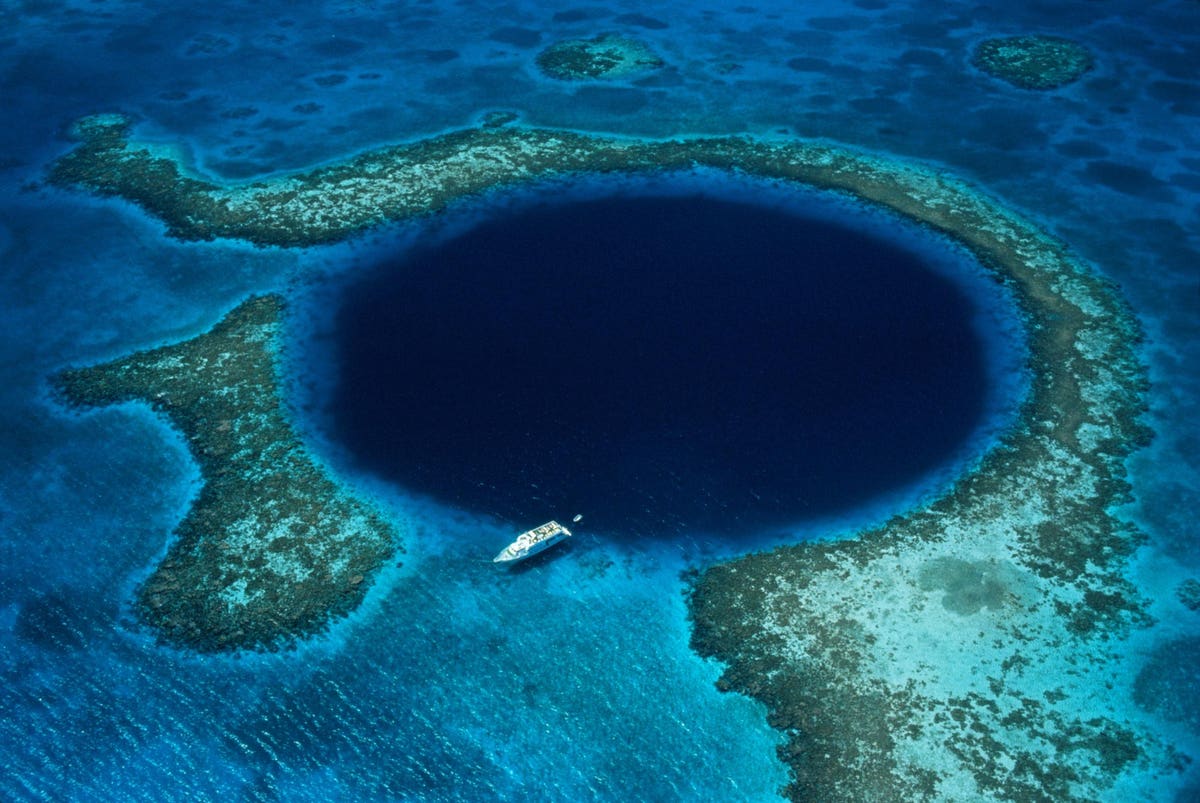 Water covers 71% of the Earth’s surface and more than 80% of it remains to be explored. But in the roughly 20% or so, humanity has come to know some of the world’s most extraordinary natural and man-made wonders, many of which are surprisingly accessible to anyone with a sense of aquatic adventure.

To get the best value for money underwater, you should head to the Caribbean Sea. From the east coast of Mexico to Belize lies a long hotspot of treasure. The natural sites in particular are impressive thanks to

the far-reaching limestone peninsula that has created a vast array of spectacular sights – from sinkholes that developed into cenotes, to massive sea holes and intricate tunnel systems.

Perhaps best known of all from Jacques Cousteau’s explorations in the 1970s is the Great Blue Hole, just 60 miles off the coast of Belize in the UNESCO Barrier Reef Reserve System of UNESCO. At around 410 feet deep and 984 feet in diameter, it is one of the deepest and largest underwater holes in the world – and one of the most prestigious dive sites known especially for training. geological aspects of its coral reefs.

Not far away, in a bay west of Clarence Town on Long Island in the Bahamas and not to be outdone, Dean’s Blue Hole is even deeper at 650 feet and up to 155 feet in diameter.

Elsewhere, the Cenote Angelita near the tourist hotspot of Tulum offers something incredibly unusual – an underwater river. Created by a layer of hydrogen sulfate separating the salty water flowing at the bottom from the fresh water flowing at the top, it comes to life as a strange floating cotton cloud drifting in the strangely lit ocean. in green when viewed from below.

It is not just about the natural attractions available. Struck by an earthquake in 1692 and a tsunami soon after, some 33 acres of the pirate town of Port Royal in Jamaica (once known as “the wickedest town in the world”) was dragged into the sea where it now sits 40 feet underwater, creating one of the most extensive, extraordinary and accessible dive sites in the world. Located at the end of the Palisadoes at the mouth of Kingston Harbor in southeast Jamaica, you can dive it all year round thanks to the temperate waters but visibility is best during the summer months.

For something man-made and on purpose, head to the Granada Underwater Sculpture Park at Molinere Point. Particularly popular because you can snorkel there without the need for scuba gear, this underwater park features individual sculptures that act as an artificial reef on which marine life can thrive. Highlights include the Vicissitudes, a circle of 26 children holding hands, and The Lost Correspondent, also known as the “man from the diary”. Returning to Nassau, Ocean Atlas is the largest sculpture ever deployed underwater, reaching approximately 16 feet from the seabed to the surface and weighing over sixty tons.

It is not only in the oceans that you will find underwater wonders to explore. Head inland from Europe to Asia and into the Tian Shan Mountains of Kazakhstan and you will find the absolutely insane sunken forest of Lake Kaindy formed from a post-earthquake landslide that has flooded a forest and created a natural dam preserving it perfectly in the icy waters. With trees emerging like toothpicks from the water, it’s spectacular even from land, but dive in and you’ll encounter a ghostly blue-green world where perfectly preserved trees have been caught on underwater plants and algae. marines to create a strange new world.

Russia’s Baikal Lake in Siberia contains just over 20% of the world’s freshwater and is the world’s largest freshwater lake by volume. With that, it is home to freshwater flora and fauna that thrive alongside over 2,500 species of animals, many of which are unique to the region – which is why it is known as ” Galapagos of Russia ”. Speaking of cold water, there are fewer places that are cooler and brighter than the completely unique Silfra Fissure. A rift between the North American and Eurasian tectonic plates in Thingvellir National Park, its glacial waters offer visibility of around 100 meters to 330 feet and the only place you can dive between continents – cool!

Of course, we couldn’t talk about underwater attractions without mentioning the biggest of them – Australia’s unsurpassable Great Barrier Reef in the Coral Sea. The most sought after and famous of all underwater attractions, its 1430 miles of diving offers nearly 3000 reefs and 900 islands, not to mention individual treasures such as the wreck of the SS Yongala, one of the dive sites. the largest, best preserved and most mysterious off the Australian coast – and the one that is most alive with marine life.

If you love the ocean but aren’t really interested in diving into it wholeheartedly, there are plenty of other options to get your aquatic fix, especially if you have deep enough pockets. If you are heading to the Maldives, you can dine 5 meters deep in the Ithaa Undersea restaurant at Conrad Maldives Rangali Island or go further and sleep soundly in every sense of the word at your very own underwater residence in Muraka.

But for the ultimate underwater experience (with a matching price tag), a stay in the world’s most expensive hotel room will immerse you in a whole new way. Lovers Deep is a specially adapted ultra-luxury submarine anchored off the coast of Saint Lucia in the Caribbean that can take you on tailor-made submarine trips organized by a team of three – your own captain, chef and butler – for the princely sum of £ 175,000 (or $ 235,000) a night.

To learn more and plan your own aquatic itinerary, check out this interactive map of the world’s best and most popular underwater attractions from SportsCover Direct.