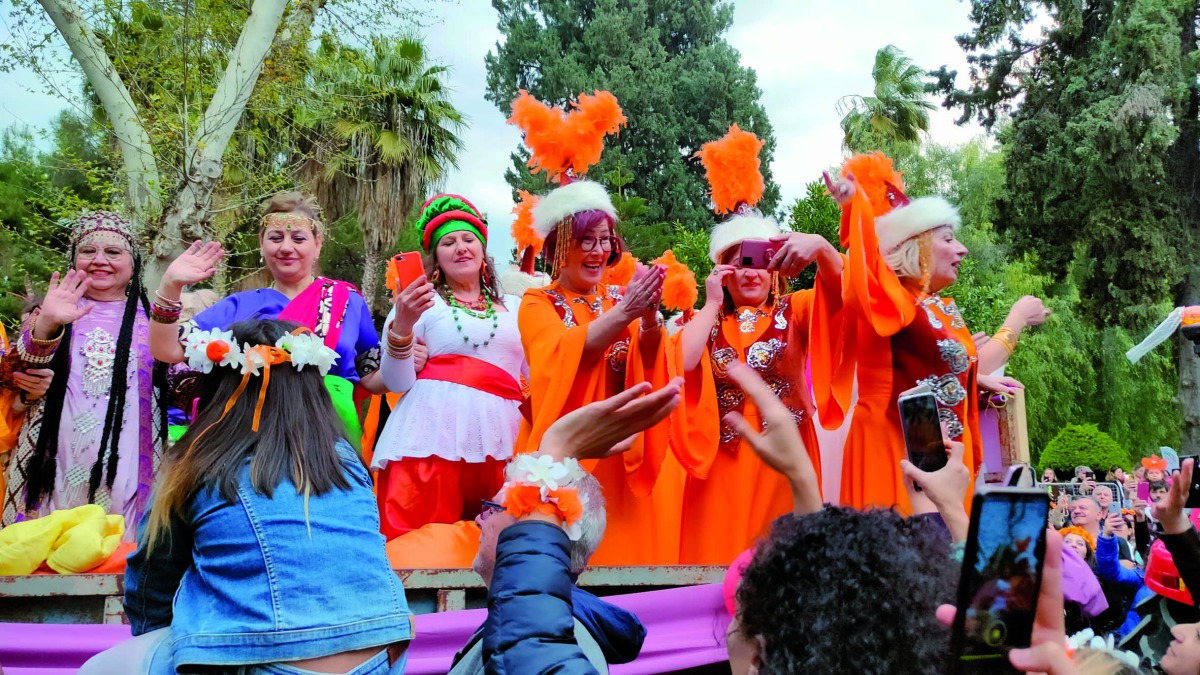 Participants in the Orange Blossom Festival in the city of Adana, Turkey.

Turkey’s Ministry of Culture and Tourism recently held the annual Adana Orange Blossom Festival in the city of Adana, a major city in the south of the country.

The festival is held every year to celebrate the flowering of orange blossoms in the region, indicating the arrival of spring in Turkey.

The festival is the most popular event in the city as it sees the attendance and participation of thousands of people in dance performances and concerts.

The festival also attracts great interest from nearby cities and international tourists, who started visiting the country at this time with the receding of the pandemic and the lifting of relevant health restrictions in Turkey.

It should be mentioned that the festival display is unique as everything was orange in color. Stores displayed their items in orange and restaurants displayed their food with orange dishes. This year, a group of people in their embellished clothes put on a musical performance through the streets of the city as the audience swayed.

With a population of over 2.2 million, Adana is the sixth largest city in Turkey and the largest in terms of population after Istanbul, Ankara and Izmir.

The name of the city finds its origin in the legends. It is said that Adana was founded by Adanos, son of Cronos. (God of time, father of Zeus). Located in the heart of the Fertile Crescent, Adana has been an important city for many civilizations for centuries.

The city is famous for several restaurants serving Turkish cuisine, the most famous of which are kebabs, especially Adana kebabs and shawarma, and traditional dishes such as Turkish tagines and delicious bread, as well as local Turkish drinks .

The town is charming and picturesque and sits on the course of the Seyhan River, one of the longest rivers in Turkey at 560 meters in length, which empties into the Mediterranean Sea.

Participants in the Orange Blossom Festival in the city of Adana, Turkey.

The tourist attractions vary from religious, historical and cultural heritage. This includes the Great Mosque located inside the old city, surrounded by a high wall built in the Mamluk style. Mamluk architecture was famous for its beauty and splendor, as well as for Ottoman inscriptions.

There are several bridges on both sides of the city, including the Stone Bridge, one of the oldest bridges in Turkey – over the Seyhan River dating back to Roman civilization. It is one of the most important symbols of the city and one of the oldest stone bridges in Turkey. The Romans built it with stones in the form of arches because they were the first to use stone for construction and to use bridges. The Roman-inspired buildings are also huge and prominent.

Moreover, the Varda Bridge is located in the Karasali district, and it is also called the Great Bridge. It was built between 1907 and 1912 by the Germans (length 172 meters and height 99 meters)

The construction of a bridge was associated with the construction of the Ottoman-German project of a railway linking Istanbul to Baghdad to facilitate travel within the Ottoman Empire. Varda Bridge has appeared in many films, including the 2012 James Bond film “Skyfall”.

The Adana Archeology Museum is one of the oldest archaeological museums in Turkey.

Founded in 1924, a year after the foundation of the Turkish Republic, the museum is rich in many antiquities discovered during archaeological excavations in Adana and its neighboring towns.

It houses artefacts dating back to prehistoric times and stone objects such as statues, inscriptions, coffins, apartments, architectural pieces, clay pottery, various pots, cylinders, seals and coins. Other archaeological finds from the Hittites, Assyrians, Phoenicians, Romans and Byzantines are exhibited in the museum.

The Great Clock Tower is one of the most important tourist attractions in Adana and the tallest clock in all of Turkey, reaching around 32 meters in height. This tower is surrounded by a traditional market which includes dozens of gift and craft shops, nut shops and sweets, especially baklava, lokum and others.

Meanwhile, the beautiful Kapikaya Valley, 40 km from the city center and about 200 meters deep and 20 km long, is a hiker’s paradise.