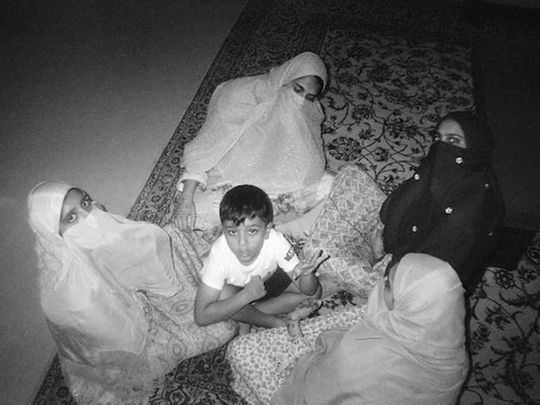 Abu Dhabi: Meet the winners of the “ Identity and My Community ” photography competition

Twenty-seven plans for communicating with the world. Twenty-seven ways to explain your identity, your community. Twenty-seven moments in time to show who you really are – that’s what Manarat Al Saadiyat and Sole DXB’s “Identity and My Community” analog photography competition demanded.

Local amateur photographers were tasked with taking photos using a disposable 35mm black and white camera to represent their identity and community.

Gulf News caught up with two of the winners – Aiham Al Subaihi and Fatma Ali – to ask them about their winning entries, using analog in the digital age and what this win really means to them. These are excerpts from the interviews.

Aiham Al Subaihi is an Emirati filmmaker based in Abu Dhabi.

What was the thought behind your winning photo?

I was thinking of sorting out dividing the amount of photos I had – i.e. 27 in the camera – into three themes. The first would be real people, so it would be me to stop people in the middle of the road or in the middle of their work and take pictures of them. The second theme, which this photo came across, is that I took my nephews and nieces and asked them to wear traditional clothes but also to express themselves as modern teenagers. We shot it [the photo] here, where I live, on Munera beach, that’s why you can see Etihad Arena at the back as well as the new hotel at the end of the pier. And I just wanted to have the best image of this place with these children who want to express themselves in neo-bedouin or modern bedouins. The third section was to recreate people as I see them. For example, I have an Emirati friend who owns four dogs and a daughter, so I took him to his neighborhood to walk his dogs just to think about what kind of characteristic I see that person.

What attracted you to this competition?

Honestly, what attracts me to this contest is the fact that I couldn’t edit it because I’m not a professional photographer so I take pictures and then rework them to make something out of them. better. I love that it’s a very raw experience in the sense that what I photographed was what I got – that’s what drove me to enter the competition as a filmmaker and not as a photographer.

It was a learning experience – some photos were very dark. I have not used an analogue for a few decades. It was exciting having to wait awhile to get the photos I have. And I have to be honest – a lot of the photos came out just black because I messed up the lighting and the aperture.

Finally, what does this victory mean to you?

This victory brings back a host of different people that I can reach as an artist and as part of CONTACT HIGH… it is an absolute honor to be recognized, for art to be recognized even by judges around the world .

Fatma Ali is a 24 year old architect with a penchant for photography.

What inspired your winning shots?

I wanted to show how we see the world and ourselves through these pictures.

How did you go about setting up the photographs?

To link my photographs and works of art to my identity and my culture, my house is the answer to this implementation. It shows the configuration that people – and I – consider to be private. The people in the photos are my family. [The pictures also show] customs, dresses and environmental behavior in general.

While I love both [digital and analogue photography], this was my first time trying analog photos and of course there is a huge difference between digital and analog like how you capture images. In the analog camera, the film is the most sensitive part. It requires more effort than digital photography, which is also considered real and true and natural. Analog was fun – the thought of waiting for something makes it more exciting. I was delighted to wait and see the results of the photos I had taken.

What does this victory mean to you?

Nowadays, to have a positive impact in the digital age, eye contact is vital. So many types of visual content are available – I think it’s essential to know what type of digital content has the most impact in our culture. I consider myself a visual learner – I believe my photography is seen as a positive impact on the digital world – they [viewers] get to know our society, our cultural image, which I decided to show. By winning, I believe I have gone beyond the translation of my photograph… people finally understand me.

The winning images from the “Identity and My Community” contest are on display at Manarat Al Saadiyat in Abu Dhabi and can be viewed daily from 10am to 8pm. Tickets are at D:30.

“ There are so few camera stores left ”

This cockroach is actually a tiny search and rescue camera