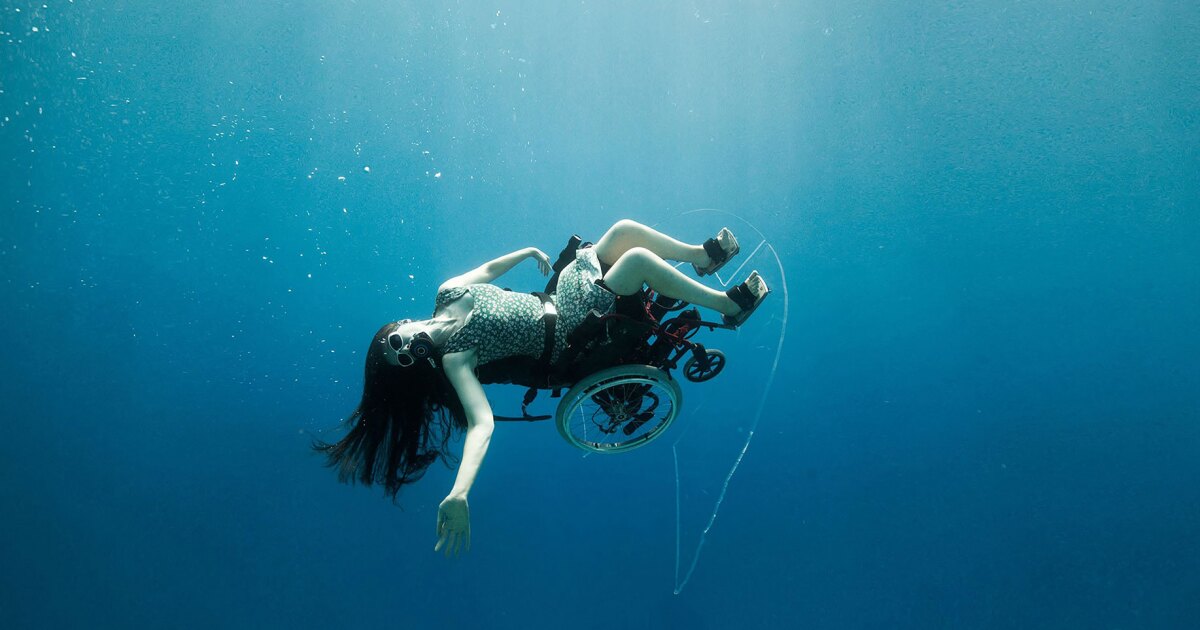 5 Artworks to See in San Diego in April

On view at the San Diego Institute of Contemporary Art through June 26, 2022

The new “Surface Tension” exhibit at ICA San Diego’s Balboa Park location is a series of video works that explore the human relationship to the ocean. Many works explore human destruction of the ocean, but Sue Austin’s short, “Creating the Spectacle! Part 1 – Finding Freedom,” focuses on the connections and hope the ocean offers humanity. .

Austin identifies as a disabled performer and uses a wheelchair. The 2012 video features the artist in an underwater wheelchair, gracefully exploring the underwater world, floating past schools of bright red fish, corals and other ocean dwellers. Light and color are powerful. Much of the work is surprising at first, but it soon feels like Austin and his wheelchair belong in the water. Mounted on the tallest wall of ICA San Diego above the atrium, the enormous projection can be seen from the museum’s entrance, the entire staircase, and even from about halfway down the lower level. The placement somehow makes the work both inevitable or invasive but also sweet, like we’re being introduced with Austin. It’s immersive for sure. [Exhibition information]

On view at the San Diego Museum of Contemporary Art, La Jolla Campus

This new acquisition for MCASD’s permanent collection was donated in conjunction with the reopening of the La Jolla campus this month.

Yayoi Kusama, born in Japan and still making art at 93, is famous for her unabashed use of polka dots as much as her large-scale immersive mirrored works, such as The Broad’s Infinity Mirror Rooms in Los Angeles. Angeles. It’s a way of depicting repetition and obsession – almost entirely influenced by the artist’s own experience with hallucination. The polka dots, and sometimes the reflection, are found in his series of pumpkins, as in “Dreaming Pumpkin”. Dotted with brightly colored vinyl dots, this massive, reflective steel water bottle is nestled prominently in the newly renovated museum lobby, set against floor-to-ceiling windows. [Visiting information]

San Diego artist James E. Watts presents a new solo exhibition of works, “Storyteller,” at the OMA exhibition through mid-July. It’s almost impossible to talk about Watts’ work without mentioning his downtown studio, The James Watts Institute for Artistic Behavior, where passers-by are drawn to discover the countless sculptures and works of art in progress. (A blogger was attracted by table saw outside on the sidewalk). Many of his works depict characters from classic literature or children’s stories, and they are made from found materials, scrap metal and wood.

“Quasimodo and Esmeralda” is a two-character sculpture based on “The Hunchback of Notre-Dame” by Victor Hugo. Each body is fashioned from a hammered patchwork of recycled scrap metals of varying shades and luster, sprinkled with luminous collages. Esmeralda has a ouija board alphabet on her collarbones, a handful of cutout flowers, and “yes” and “no” on each breast.

There is a curious gravity to these works and an unexpected lack of fantasy – in part because of their incredibly expressive and grave sculpted faces. Watts has a way of infusing character and history into his pieces, digging deeper than the story we think we know. [Exhibition details]

On view at the Museum of Contemporary Art San Diego (Downtown) through April 24, 2022

The “Yolanda Lopez: Portrait of the Artist” exhibition is wrapping up this month at the Museum of Contemporary Art downtown, so be sure to see this entire exhibit while you still can.

It is six works in one, a series of massive charcoal drawings on butcher paper. Individual titles include “Self-Portrait”, “Mother” and “Grandmother”, then the reactive works, “Artist Standing as Grandmother”, “Mother Standing as Artist”, and “Grandmother Standing as Artist”. Lopez, who died in 2021 shortly before the exhibit opened, specifically sought to challenge stereotypes of Chicana or Latina women with these works — created in 1975-76 and recently restored before hanging at MCASD. In the artist statement, Lopéz underscores this intent in some of the artistic choices she has made in this series, such as everyday women, non-glamorous, and massive scale to signal significance.

“I chose to work monumentally as a dramatic way to boldly characterize each woman. I wanted to radically challenge the expectation of a small, intimate study, as physically small images involve controlling the viewer’s attention”, Lopez wrote. (Excerpt from the catalog of the MCASD exhibition.)

The works are imposing and larger than life. The six figures are located near the entrance and stare at visitors as they enter the beginning of the exhibition, both a challenge and an invitation to go further. My favorite part: In the way they imitate each other in the second set of works, there’s a cheerful, unapologetic camaraderie between the three generations of women in Lopéz’s family. [Exhibition information]

On view at the Mingei International Museum from April 8 to October 2, 2022

Moses was a Hawaiian artist known for the intricate hats he carved out of everyday brown paper bags. In a new exhibition at Mingei, “Fold, Twist, Tie”, a collection of his paper hats from the 1980s will be presented alongside his photographs of bathers carrying his sculptures.

The exhibition aims to bring the process to life, and I particularly like the juxtaposition of a hat as an art object and a photo of it being worn. The wearer no doubt marveled at or revered the work, but it feels delightfully far removed from a modern “don’t touch the artwork” sensibility.

One of my favorites is the towering “Sun Bishop” hat, constructed of repeated tube-like lengths of rolled paper bag strips, sitting high on the head like a bishop (fun fact: a bishop’s hat s ‘calls a “mitre”). It’s not the most elaborate of the drawings in the exhibit, but that’s part of its charm. [Exhibition information]