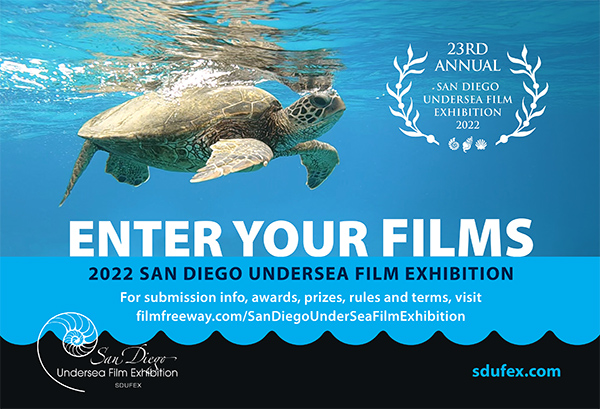 This year’s San Diego Underwater Film Exhibition (SDUFEX) is now accepting submissions. As in previous editions, underwater filmmakers can submit entries in two categories – up to 5 or 10 minutes in length – with a maximum of two submissions per person. For an entry to be eligible, at least 50% of the film must be shot underwater.

And the good news is that, unlike the past few years, organizers are planning to hold a physical rather than a virtual event, taking place at Qualcomm Hall in San Diego on October 1.

See the press release below for more details.

The San Diego Underwater Film Exhibition (SDUFEX) is accepting entries for its 2022 film festival by June 15.

For the first time in three years, we plan to hold an “in-person” film exhibition again! The film festival will be held on Saturday, October 1, 2022 at Qualcomm Hall in San Diego. The festival will also be a hybrid event with some films available online.

Films can be submitted in two categories:

For more details and to submit films, please visit: https://filmfreeway.com/SanDiegoUnderSeaFilmExhibition